Hey there LWS comic fans and welcome to another new strip called “Getting Old.” As you may have guessed, this comic is about getting old and with that comes all sorts of fun aches and pains. Pains that generally stick with you forever even though just months prior you were fit as a fiddle. Oh well, such is life and aging, am I right?

This LWS comic was inspired by true events. Literally, I was wondering how I was going to get a Living With Stacy comic strip out today. My arm cramped up something fierce so I was actually thinking, “Can I do a comic today?” Thankfully, I was inspired by my own body aches and pains and completed the comic you see now.

So, what about Stacy? Oh don’t worry, she’s always on the brink of a tension migraine. And if not for my arm cramps, I would have given her a fantastic massage. The best the world has ever seen. Although, I don’t know why the world would need to see it…Anyhoo, we just both wallowed in pain until she had to go to work and I had to draw. Haha. A fun Saturday if I ever knew one.

I hoped you liked this week’s LWS comic. Perhaps next week I’ll have a bit more electrolytes to counteract whatever cramping urges my body has. Until then! Peace.

Oh, and don’t forget to check out my other LWS comics like “Mattress Mayhem.”

Hey there LWS comic fans, another Saturday has come and you know what that means? That’s right, I have a new comic for you today called “On My Nerves.” Has anyone been in this situation before? What to do when a timer goes off and you don’t wanna get up to go turn it off? I know, I know. Such is life. Like Ryan says in the second panel, “If only there was a way I could make it stop…..From over here.” Wouldn’t that be great? Haha.

Maybe in the future we’ll be blessed by the consumer gods with a microwave timer that is remote controlled wireless through your smart phone. And…wait…I bet that exists already. Hm, I should go check on amazon. Haha.

Anyways, I hoped you liked “On My Nerves.” I find a certain level of stubbornness to be quite humorous. And if you did too, then why not check out my other LWS comics. Perhaps this one called “Growth Spurt.”

Hey there LWS fans, I have a new comic out today called “Toilet Seat.” I can’t think of anything to write at the moment, so I will come back tomorrow and fill this page up with lots of lovely words. Until then.

If you liked “Toilet Seat” and my other LWS comics then you should definitely check out LWS #117 called “Arbor.” It’s one of my favorites.

Heyo LWS comic fans and welcome to another new strip called “Let Us In.” Ryan and Stacy attempt to get a good nights sleep after finding their lonely cat Tori a new friend. This new friend is none other than the lovably chonky kitten Jeanie. Well, Jeanie isn’t a kitten anymore. Keh, keh. So how did everything turn out for our married heroes and their sleep endeavors? Haha, well let’s just say, now there are more kitty mouths meowing, “Let us in!” 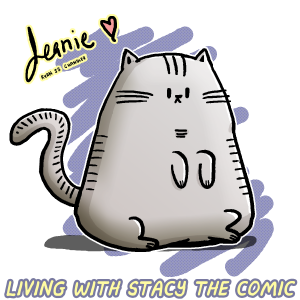 Anyways this page (Let Us In) marks the end of “New Kitten Story Arc.” Jeanie is officially part of our growing family. Expect to see more of their cat shenanigans in the future. Also, I was thinking of making a few Cats of LWS T-Shirts if anyone was interested. How can you get a hold of one of these precious tees? Well, contact me of course with your size and measurements and I’ll set you up with one. For everyone else, I’ll be making a post about merch in the future.

So that’s it for this week’s LWS comics strip. I hope you enjoyed it. I know I really enjoyed writing and drawing our new feline friends. Also, drawing Stacy frustrated is fun too. 🙂 Stay tuned for more updates. Have a good weekend!