ABOUT LIVING WITH STACY

Living with Stacy is a modern, slice of life, comedy comic about the everyday routines and struggles of a happy, young couple living with OCD. Join Ryan and Stacy (and their two cats) as they attempt to comfortably coexist, love each other and push through life in hilarious and relatable ways!

LWS wants to show you that having OCD, or a partner with OCD isn’t the end of the world. While dating someone with obsessive compulsive disorder does provide some unique (and occasionally funny) challenges, it can also be normal, loving and warm, just like any other healthy relationship. 🙂

For Reddit – “I’m u/flapjackstudios, and I want some flair!”

Hey there, I’m Ryan and I draw Living With Stacy the Comic. Let’s see…I created LWS in July 2014 and intended it to be a humorous take on my relationship with my wife, Stacy. Stacy of course, was (and still is) biggest source of inspiration as well as the struggles of living together as a young, happy couple. Yes, you can struggle and be happy at the same time. Haha. However, what sparked my initial interest in creating a comic centered around our relationship was what I call “The Banana Incident.” This incident was transcribed word for word in my LWS strip #01 – Banana. Suddenly, an overwhelming urge to share the ridiculum struck me, and that night LWS the comic was born!

In August of 2014 I was approached by my local Newspaper and asked if they could publish Living With Stacy in the newspaper. I said yes and I’ve been excitedly drawing LWS comics ever since! So now you know a little about me. If you like my comic, why not leave a comment? Do it, it’ll feel good.

President of Flapjack Studios, Ryan Chandler is also a writer, series creator, character designer, and story editor. A graduate of NSCAD University, he is trained in animation, film, screenwriting and the traditional arts. He has two kitties, Tori and Jeanie and loves to eat food (especially chicken). 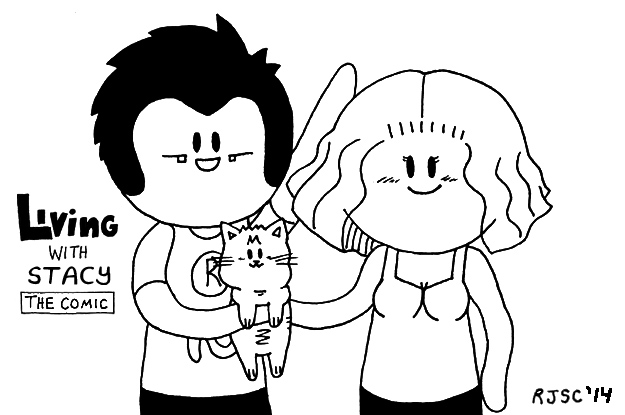