Well hello my lovely LWS fans, I have a new comic out today called “Mario Maker.” As you may have guessed from the title, Mario Maker for the Nintendo Switch came out yesterday and I have been having a blast playing it. If you’re new to Mario Maker, then let me elaborate. You create and design your own Mario levels that span visual styles and game physics from Mario 3D World all the way back to Super Mario Bros. 1! My style of choice is Super Mario World and Super Mario Bros. 3!

So what does this have to do with Living With Stacy? Well, I’ve been playing it so much that I almost forgot to draw today’s comic. Which funny enough, was the inspiration for the comic itself. Haha. Oh how meta I am today. I even drew a LWS style version of Mario himself contemplating a juicy question block. I’ll post it below for your enjoyment. 🙂 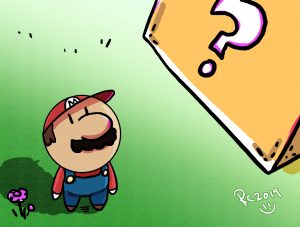 And that’s it for today. I wonder what I should do now that I’m finished posting this update? Hm…OH, I know! I’ll be playing more Mario Maker! Just you wait until I upload some of my expert courses! Hope to see you online. 🙂