Modern Day Sisyphus – LWS Comics #215 – It’s task vs task in this modern day Sisyphean nightmare! Watch as Stacy tries to do the one important thing but is drowned in an endless sea of meaningless tasks! Too bad important task, wanting to complete you so that Stacy can feel a shred of accomplishment is an exercise in futility. Oh well, I’m sure the hundreds of gym membership renewals and email typos can fill the void, deep down in her heart’s soul.

Anyways, that’s it for this week’s comic. If you liked Modern Day Sisyphus, you should check out my other comics. Lots to love. If you want to learn more about Sisyphus, Google him. He’s the Greek guy that did a bad thing and was punished to endlessly push a boulder up a mountain, only for it to roll back down just before the peak. Greek gods are fierce, yo!

Hey there LWS comic fans, I have a new strip out today called Screw You Jennifer “Life Saver.” :p Every office has a Jennifer, am I right? No offense to the Jenns out there. It’s more like a young version of a Karen, or Sheila if you’re an Ozzy fan.

So Stacy is having a long day, but doing her best to get through it by being as helpful as she can. So when a co-worker comes to her with a problem, Stacy puts her thinking cap on and…gets stuck with all the filing. Ouch! Come on Jennifer! Although if you stop to think about it, Jennifer did a kind of surprise attack, in which case one could consider her quite the tactician. Hm…food for thought. Lol.

Heyo LWS comic fans, Stacy is crushing it at the office today, so it’s not a coincidence that this particular comic strip is titled “Crushing It.” Ever have one of those days were you are so productive and the time is seemingly flying by? Don’t you love those days? Also, ever have one of those days where you are super productive, and you could bet your half eaten ham sandwich that the day is almost over, only to find out that it’s not even lunch yet? Yep, I bet you have. Ha.

Anyways, it’s still feels good to own a day, but I guess whether time flies or not depends on the day. Please like, tweet, and share. You can read more comics here.

Hey there LWS comic fans, I have a new strip for you straight out of the ye ol’ English era, called “Fare Thee Well.” Stacy barges into the bedroom with a dramatic flourish. “Oh Ryan, my sweet darling Ryan,” Stacy laments as she takes to her knees to kiss the back of Ryan’s soft hands. Haha.

This one was fun to write, especially when you’re married to a reenactor who loves to read historical texts. 🙂 Also, this one should be quite relatable to y’all. Though I wish it weren’t so, most modern day jobs are a form of torment. 😉

Anyways, that’s it for today’s strip. If you liked “Fare Thee Well” then check out all my other comics. Chances are, you’ll love those two. And please, share, share, share!

Wakey-Wakey eggs and bakey. Haha. I have a new comic out for you called “Wakey-Wakey.” Today’s comic teaches us a lesson oft learned from experience…and what experience should tell you is, always replace your broken alarm clock right away! Never think your spouse or loved one can wake you up instead of your phone or bedside clock. Even if they say “Oh hun, it’s fine. Just wake me up with a soft voice. I don’t need to set any alarm. Thx, love you.” Not even then. It’s a trap. Haha.

It’s George! Get your It’s George the T Shirt today, while supplies last! Who is it again? It’s him, George the Spider! That’s who! This isn’t some no name, knock off unauthentic George– It’s the REAL DEAL George, 100% authentic to the max! Are you an arachnophobe? Who cares! Forget the fear and get the George! It’s George! Come get some George! 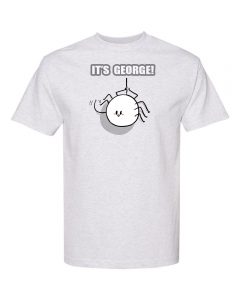 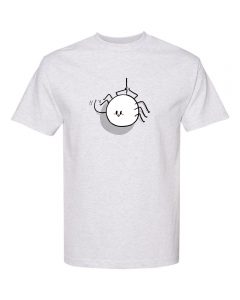 Get your T Shirt(s) by emailing me here: livingwithstacy(at)gmail(dot)com.

This is fine…Everything is fine…It’s just one of those days… And welcome to another new LWS comic called “One of Those Days.” Ryan comes the bedroom to discover Stacy eating wings and sipping root beer under the covers. So naturally, Ryan politely asks “Hey hun– What’cha doing?” To which Stacy replies, “I’m fine.” Oh oh…Someone does not in fact sound fine. LOL.

Ever just have one of those days? No shame in eating chicken wings in the bedroom…in the bed kind of day? Sure you have! Sometimes you gotta do what you gotta do to get by in this big, crazy world. Ha.

Written by Ryan on February 6, 2021. Posted in LWS Comics

Welcome to a new LWS comic called“Chairs.” “Wow would you look at us, we have three whole chairs!” Haha, looks like someone is movin’ on up in the world. Little does Ryan know that they in fact, have four chairs. Hohmygod! Haha.

You might think this one is completely random, but no, this is actually word for word. A true story in it’s fullest. It’s one of my favorite weird moments that is so obscure I had to do a comic about it. And yes, it was about our three four chairs! :p

Anyways, if you liked this week’s comic strip, then check out my others. You just gotta hit those arrow buttons and they’ll take you to my next comic or previous one too. Also, please share, share and share again! Happy weekend!

Hey LWS fans, I have a new comic our for you today called “Trust Me.” Ryan finds a trust me exercise online and convinces Stacy to try it out with him. You know it, it’s the one where your partner falls backwards with their eyes closed, and you catch them. Yeah, that’s it! Pretty classic.

This type of exercise places the falling person in a vulnerable position in which they must trust the other person to do protect them.The thing is, you should probably have a begin now phrase that means “start now, I’m ready” as you’ll see in the comic….Haha.

Ryan gets a phone notification, and turns quickly to shut it off– Cuz you know, no distractions during the trust exercise. Stacy falls back with a KLONK! And Ryan delivers the hilarious line “Ready when you are.” 🙂 Ah my…anyways if you liked this one, be sure to check out my other LWS comics.

Well hello there LWS fans, I have another new comic for you called “Apple Pie.” Ryan smells a freshly baked, homemade apple pie and floats towards the delicious scent like a Looney Tunes character. Did Stacy bake a pie? Did she buy a pie? Stacy turns revealing apple pie scented soap. Ryan caught up in his day dream attempts to eat the soap, agreeing with Stacy that it is “very convincing.” Haha.

The moral of today’s comic is “Don’t eat the soap, no matter how great it smells.” Anyways, that’s it for today’s comic. If you liked it, then please share and like Living With Stacy with your friends and loved ones. Happy weekend! 🙂