Stacy is finally reunited with Ryan– Wait– Who exactly is this hairy creature hissing at Stacy? Turns out it is in fact, Ryan after 6 months of isolation. Luckily, Stacy’s embrace calms him and melts away his feral exterior. She utters the words, “I missed you.” To which he replies, tears welling up, “I missed you too~”  Aw… how sweet. The two reunited again. Hehe. 🙂

I hoped you liked this week’s LWS comic strip. If you did, then please check out my other LWS comics. You can find them the LWS comic archive.

Also, don’t forget to check out my PATREON! I have full color comics only available through Patreon, and there is even a special tier that allows patrons to see ADVANCED RELEASES. That’s right– see pages ahead of everyone else and support the artist at the same time! It’s a win-win! And don’t forget to like and share! 🙂 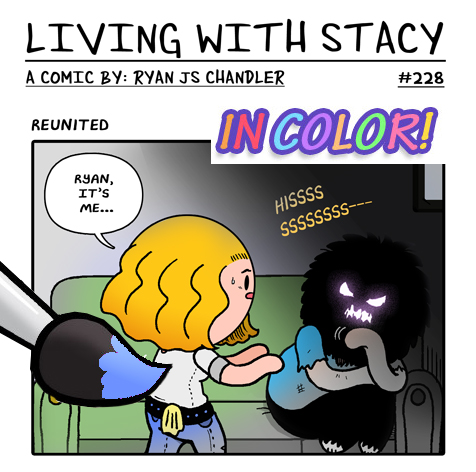 Honey, I’m Home! Stacy bellows as the door creaks open eerily. It is pitch black. A creepy hissing sound is heard emerging from the darkness. “Ryan, are you there?” Stacy enters warily. She notices a strange smell that is like a mix of stale cheese fries and old onions…The hissing sound grows louder. “What is going on here?” Stacy turns on the lights, and a dark figure with hair standing on end let’s out a large hiss! Haha. Yes, if you were wondering, that is Ryan in comic form, hissing at the sudden flash of bright lights. “Who is this intruder,” he thinks? Ah my– Time can do so much, it seems. Isolation is indeed, difficult for some. To all you out there who have to self isolate, stay strong, and stay connected.

So that’s it for this weeks LWS comic strip. If you liked it, you should check out my PATREON, where you’ll get access to FULL COLOR pages and weeks worth of advanced comics. Stay ahead of everyone else– sign up for my Patreon and receive comics ahead of social media! And as always, if you liked Honey, I’m Home, then please share it with your friends and family. 🙂

My precious…. Oh oh– some one has let out their inner Gollum. 😮 Today’s comic is aptly entitled, “Precious.”  Ryan passes by a mirror in a daze. A voice calls out to him– and GASP! it is a shadow version of himself! The shadow goats Ryan into feeling abandoned– He argues back but the shadow has a trick up it’s sleeve. He found a new precious-zis…one that will stay with them, forever! Haha. Yes it is a mop with googly eyes on it– but also, she baked cookies! Ryan in a hypnotized and hungered state, zombies towards the fantasy– his new “precious” awaits…

Ah my– being alone can be rough. I do not envy long distance relationships. Nothing against them either, but it takes a strong will to be alone. I dare say, it’s a valuable skill! 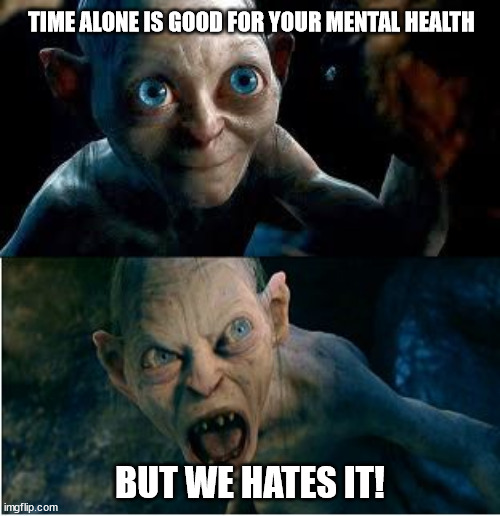 So that’s it for this week’s LWS comic. If you liked it, then check out my other strips. Or bid on one of my ad spaces over on COMICAD NETWORK. Better yet– Head on over to my PATREON and check out my full color pages. Not only do you get full colored pages of all my newest comics, you’ll also get re-colors of my older strips. Also, for a higher tier, stay ahead of the pack by seeing 1 week’s comic in advance (1 comic ahead of what’s on my website)! Neat! So if you’re a LWS fan, please support me, it goes a long way! 🙂

New LWS Comic comin’ at ya called “Being Alone.” Ryan contemplates the positive aspects of being alone while gazing out his apartment window. To his credit, it seems he did come up with a couple of good points… like the birds chirping. That’s a good one. And uh…I’m sure there are others. Haha. But staring into the infinite void is probably not one of them. Best to avoid void staring in general, as to not awaken your inner somberness.

In other news, I think I will be adding my colored comics to my PATREON account only, so I actually have something to post there. Coloring is good practice and doesn’t take too much more time for me, so expect to see all colored version of the my newest Living With Stacy comic strips on my PATREON in the near future.

That’s it for this week’s strip, check out more on in my LWS comic archive. 🙂

Welcome to “Roleplaying Be Like”, another new LWS QUICKLETS comic. You may have noticed, but we’ve been between a weird do we self-isolate or not place for some time. Now that it’s Summer time, that tension is even higher. Luckily, there is a fun little thing that everyone can do when stuck at home. And that is role playing.

Some of you may have tried this already. Lucky you. But for the rest of us, role playing can be tricky. You have to invent a cool persona and depending on the scenario, you have to stay in character and give your acting skills a work out. But if done right, it can be a wonderful distraction from all this self-isolation crap and insane world news.

In any case, whether you are good or bad at acting, give role playing a whirl. Because in the end, it’s the effort that really counts. And for the majority of us in self-isolation, we all know the rewards can be worth it. If you catch my drift. Happy Role Playing everyone! 😉

Hey all you Living With Stacy fans, I have another new LWS QUICKLETS for you called “Summer Be Like–“ That’s right, it’s almost Summer! And that means it’s time for a summer style joke! You ready? Okay. What happens when the general public meets loosened social restrictions…?

LOL. This was inspired by all those people who went to that park in Ontario. Some 1000 or so people trying to alleviate their cabin fever, all at the same time, packed into one pubic park! Yikes! This was just after the Provincial Government loosened some parks and beach restrictions. I guess when you give a little, you get A LOT! 🙂

Here’s hoping no one there was actually sick, or had Covid-19. We can all acknowledge that mass gatherings and ignoring social distancing is reckless, but we don’t want anyone else getting sick.

Hey y’all you Living With Stacy fans. I have another new LWS QUICKLETS comic for you called “Jokes Be Like.” In this one, Ryan is telling a masterpiece of a self-isolation joke. It is almost on the level of a dad joke, but just a bit more high brow. Lol.

Quaran-teens! Get it? Cuz they’re teens. Indeed, well done Ryan. I suspect he’ll have a few more jokes to tell in the future, so stay tuned for some good ones. Jokes after all, are a good way to alleviate stress. So I say, keep ’em coming. 🙂

Well I hope you liked today’s gag, literally. Stay tuned for more. I plan on doing QUICKLETS until one, I run out of jokes or ideas, or two (which I really hope to be the case) the viral pandemic is over. If the stretch of time is going to be longer than we’d all like, I may ask for some of you for your self-isolation stories. Maybe some of them will get into a comic? Who knows.

Anyways, catch you on the flipside.

Hey y’all, here’s another new LWS QUICKLET just for you called “Internets Be Like.” So how does the internets be like anyhow? Well, during self-isolation, the internet is a wonderful resource to curb boredom and cabin fever. It also is a little bit addicting, so during these hard times, one can find themselves online from 9:00am to 11:30pm. LOL.

And when online for such lengths, one can often discover very surprising things that they did not know before (as well as some eyestrain, get those blue light filters). My such revelation was a song by the Chemical Brothers called Salmon Dance. Have you heard of this song? Haha, it is hilarious and very 90s-esque.

Anyways, that’s it for today’s Quicklet, if you like these then share them around. We’re all in isolation together (figuratively), so let’s not go insane. Share my comics, spread it like…uh…like BUTTER. Yes, spread it like butter! 🙂

Hey comic fans, here’s another cool LWS Quicklet called “Neighbors Be Like.” Neighbors Be Like is inspired by all the self quarantined apartment and neighbors singing songs and playing music together, like some social distancing party. I was moved by the human spirit and the willingness to connect to people even though all of us are ordered to be far apart.

Anyways, that’s it for this Quicklet. Feel free to check out my LWS Facebook page. Welp, my hands are freezing so I must stop typing. I hope continue to stop by and read my comics. Also, it helps to share, share and share again. Don’t keep me a secret all to yourself. 🙂

Written by Ryan on April 1, 2020. Posted in LWS Comics, Quicklets

Self isolation is hard…It can be maddening and cabin fever producing. It can be a time to reflect, goof off or be paranoid. Either way, isolation has a time limit and it’s time to self isolate.

I try to do these everyday, so keep coming back to check for new comic strips. Stay safe and healthy. 🙂